There's an old movie that starred Peter Sellers titled Being There. The story is about a simple-minded gardener named Chance (played by Sellers) who spends his entire life living in

the townhouse of a wealthy old man, tending the garden. Chance's entire knowledge of the world is derived from what he watches on television, and gardening of course. The old man dies, Chance moves out and wanders aimlessly until he gets hit by a car driven by an advisor to the U.S. president, who takes Chance in to recover. The advisor and his wife (Shirley MacLaine) see that Chance is dressed in pricey tailored clothes (left to him by the old man) and assume that Chance is an upper class highly educated person. They ask him his name; he replies "Chance, the gardener". They mistakenly think he says Chauncey Gardiner, and call him by that name from then on.

All Chauncey talks about is gardening and weather, but because the new people around him think he's well educated they take his simple statements as profound philosophical observations about politics and the economy. So does the president, who Chauncey gets introduced to. The gardener rises in prominence, becomes a celebrity and resonates nationally; a jaded public think that Chauncey is putting forth an informed view on politics and they like his simple non-political approach. Eventually it is suggested that he could be the next president. But, as the movie viewer knows well, he is nothing more than a simple-minded gardener who watches a lot of television.

Here's the point: belief is in the mind of the believer. 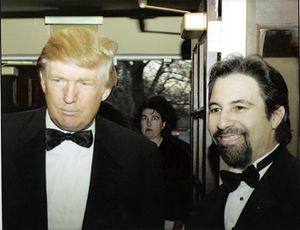 In other news...  here's a flashback: Back in 2005 I posted a photo of myself with President Bush at the White House. It wasn't long before I got email from various people who assumed I was pro-Bush, and they were eager to tell me why I was wrong, or what their political opinions were (or their opinions of me), amid the growing anti-war-anti-Bush fever in the country at the time. I suppose that when you post a photo of yourself with a politician, people just assume you are a supporter. Maybe I was, maybe I wasn't.

Back to the business of bass: Check out my latest articles on Bass Player: first up, my interview with Billy Joel's longtime bassist Andy Cichon, which appears in this month's April issue (on newsstands now). Also up on the BassPlayer.com site is my new series titled Give The Drummer Some, where I ask world class drummers what they look for in bassists, who they like, etc. The first installment features the one and only Peter Erskine. Please feel free to leave your comments below the article on the BP site.